Khao Yai National Park | One & a half day tour

Khao Yai National Park is the most visited National Park in Thailand, and for good reason! In 1962, this magnificent natural reserve became the first National Park in Thailand and at over 2000 square kilometers it is currently the third largest in the country. In 2005 this unique park was once again recognized as it became a part of the UNESCO World Heritage Listed Dong Phaya Yen – Khao Yai Forest complex.
Khao Yai is home to over 300 bird species, 70 mammal species and 74 different reptiles and amphibians! When you consider that this includes wild Asian Elephants, two species of bears and even endangered tigers, it’s not hard to see why this National Park has become a hot spot for wildlife spotting in Thailand!
​GREENLEAF GUESTHOUSE:
​
Greenleaf Guesthouse is a family run business located on the main highway between Pak Chong and Khao Yai. The guesthouse consists of a small restaurant - that churns out some incredibly cheap, tasty Thai favourites – and a guesthouse out the back away from the main road. The rooms in the guesthouse are basic but spotlessly clean and come with private bathrooms with hot shower, fan and a comfortable bed. But let’s be honest, you don’t come to Greenleaf to hang around the guesthouse.

You can read our full review of Greenleaf Guesthouse here.
​
OUR EXPERIENCE:

When we called Greenleaf Tours at 8am and asked if we could stay at their guesthouse and go on one of their tours, it took them less than 5 minutes to have a car waiting to pick us up outside our hotel in Pak Chong. This service is complimentary for anyone who books onto a tour or stays at the guesthouse and makes getting to Greenleaf a simple, fuss free process.

Upon arrival at Greenleaf Guesthouse, we were greeted by the delightful staff who sat down with us and explained their tours and showed us some fantastic photos of the wildlife that can be found in Khao Yai National Park. They showed us to our room and gave us some time to decide whether we wanted to do one or both of the tours on offer.
​
​At sunset we went to a nearby mountain where we witnessed hundreds of thousands of bats flying out of a cave for their nightly hunt. This might not sound like much, but it is definitely a must-see sight. I had no idea just how spectacular this would be and I highly recommend it. The swarm of bats swirls and twists it’s way across the sky creating incredible patterns as they go. It’s one of those experiences that must be seen to be believed
The following day we had an early start for the full day tour of Khao Yai. We had a group of seven people, accompanied by a guide and a driver. Before we even arrived at the entrance to the national park, the guide stopped the car suddenly to catch a snake from a nearby tree! We started by visiting the Park Headquarters where there is some great information and displays about the flora and fauna found inside the park as well as general facts and information about the parks history.
Our final destination for the day was one of the parks four waterfalls where scenes from the movie The Beach were filmed. On our way to the waterfall, we were lucky enough to come across the same elephant as before only it was now ripping down trees and eating it’s way through the park! It was incredible to see this amazing creature not once but twice and we appreciated every minute we had with it.

When it started to rain towards the end of the day, our guide took us into a small shelter where he bought us all hot coffees and drinks while the rain stopped. The day was absolutely fantastic and we returned back at the guesthouse at around 4pm.

Our guide was friendly, knowledgable and spoke excellent English. The lunch and snacks provided were simple but substantial and the park itself is excellent. I would highly recommend Khao Yai to any visitors to Thailand and Greenleaf Tours is by far the best value and service tour in the area. 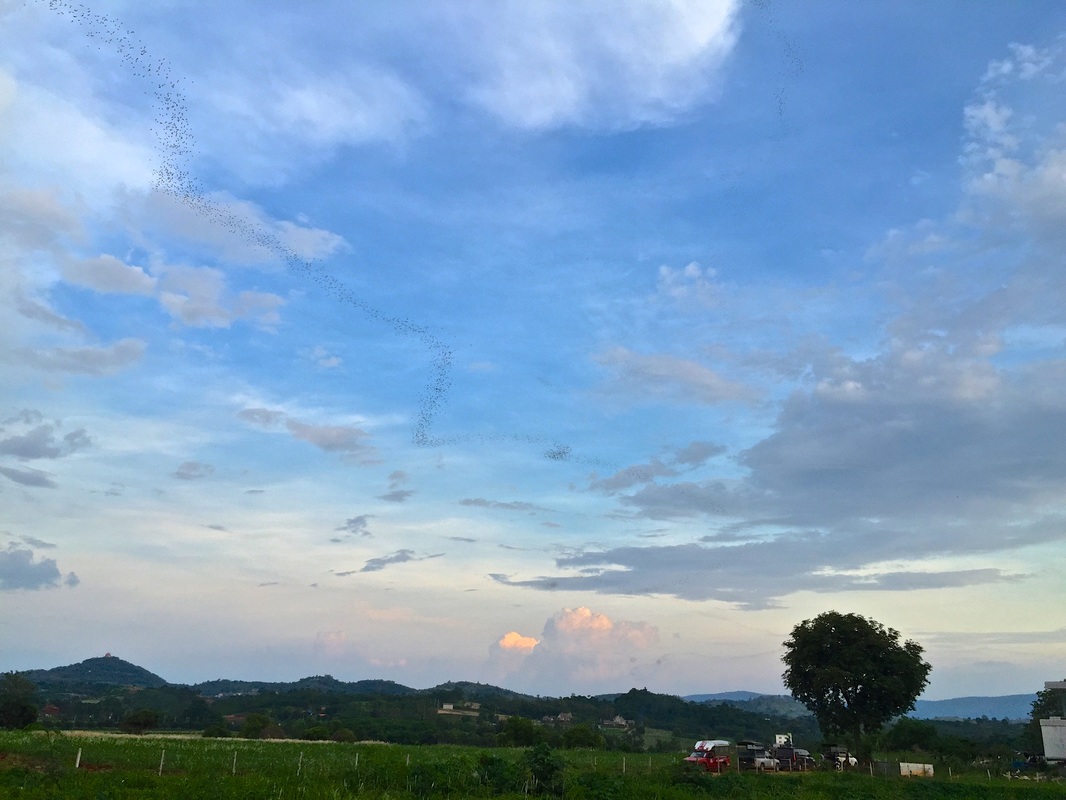